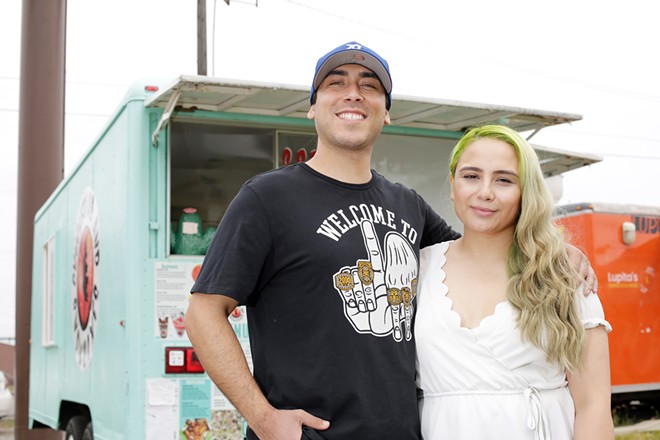 Summer means outdoor activities, so while you’re out and about and need to fuel up, look for local food trucks at farmers markets and other outdoor community events, like the weekly confab of trucks at Spokane’s Riverfront Park (Saturdays from 11 am-2 pm through Aug. 31), and Food Truck Friday, also downtown (221 N. Wall, Fridays from 11 am-2 pm through Aug. 26). While established local favorites are likely to roll through, also watch out for these relative newcomers to the mobile eats scene.

If you’re an adventurous eater, you’re gonna love what Chucherias and Snowcones is serving up. Chucherias, which loosely translates from Spanish to “junk food,” dishes out authentic Mexican treats — with a twist — at the Hillyard Food Truck Pavilion (5118 N. Market St.) every Thursday through Sunday. With a wide array of options to choose from, you’ll wish you’d saved room for just one more item.

The corn in a cup ($4) is the menu’s standout food item. Taking inspiration from Mexican street corn, or elote, the corn and mayo mixture is topped with cotija cheese and your choice of spicy chip: Cheetos or Takis. We went with Takis, and the spice was the perfect complement to the creamy base. Chucherias also offers some typical Mexican street fair food like churros ($1.50/each); fruit in a cup ($7.75) sprinkled with Tajin seasoning (a blend of chili peppers, lime and sea salt) and skewered for easy eating, and ceviche ($7.25) that packs bright, fresh flavor into a small container.

On a hot summer day, indulge in one of Chucherias’ many snow cone offerings ($4 for 16 ounces; $5 for 24 ounces). Now, these aren’t your traditional shaved ice cones: They’re cups packed to the brim with delicious fruit-flavored syrups and sweet and sour candy (add an Otter Pop for 50 cents). Flavors include blue razz, lemon lime and fruit punch. With a menu as large as Chucherias, it’s tempting to go back weekly to try a new treat every day. We won’t tell anyone if you do! (MADISON PEARSON)

You had us at fries. Hot, salty, crispy outside and tender inside, fries are a treat by themselves. Could fries be any better? Yes, at Forbidden Fries, where Marcelo Morales loads roughly half a pound of skinny fries with toppings reminiscent of tacos, pizza and other comfort foods.

Morales’ carne asada ($14), for example, is one of the most popular of his continually expanding lineup of loaded fries. It’s smothered with steak strips, queso fresco, chopped onion, sour cream, cilantro and verde sauce.

Morales launched Forbidden Fries in spring 2021 with a booth at the Spokane Valley Mall, inspired by cheesy fries he ate as a youngster at an Americana-style spot called Hoagieville in Missoula, Montana.

“I know there’s places around town to get fries, but not a whole menu of fries,” says Morales. “So I decided to capitalize on that.”

Right now, he’s a one-man operation, hauling his fryer, griddle, coolers and other gear to places like the Hillyard Food Court and both Millwood’s and Fairwood’s farmers markets. Rather than a truck, he sets up a tent, heats up the fryer and lets the enticing aroma of fried food do the rest. (CARRIE SCOZZARO) 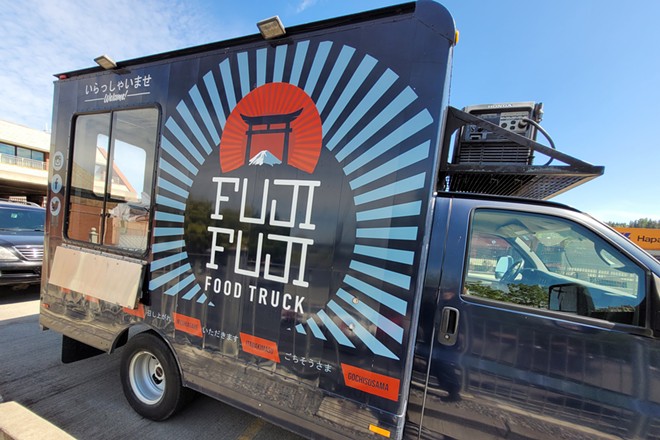 Take your taste buds to Japan with a stop at Fuji Fuji.

I’ve been covering food for the Inlander for the better part of the last decade, meaning I’ve tried a lot of local restaurants. While plenty of eateries’ dishes have become personal favorites, exponentially more are rarely an afterthought. Not the karaage chicken — crisp, fried, seasoned pieces of lightly breaded chicken, here served with a side of cabbage slaw — at Fuji Fuji Food Truck, an operation that started serving Japanese-inspired street food a little more than a month ago.

Owner Ben McGrew is still developing and growing Fuji Fuji’s menu, and as of this writing operates on Saturdays, from 5 to 8 pm (closing sooner if he sells out), outside Inland Cider Mill (1020 W. Francis Ave.) in North Spokane. He hopes to soon add more regularly rotating locations to the navy blue truck’s schedule.

“Since the pandemic, when everyone found a new hobby, I knew I wanted to go into a food truck business,” he says. “When it came time to start cooking, Japanese cuisine was a natural interest.”

For the first few weekends of business, McGrew has just served his karaage ($10) and gyudon ($12), or beef bowl, to make sure both recipes are perfectly tuned for onsite preparation. He expects the menu to expand throughout summer with other authentic Japanese and Asian dishes not usually found at local restaurants.

For the karaage, McGrew uses potato starch instead of flour, resulting in a thinner and perfectly golden outer layer. Hot out of the fryer, each bite of the chicken, topped with seasoning and a drizzle of mayonnaise, is an explosion of umami and fat and salt and juicy, soft chicken. After finishing a portion, I could have gone back for seconds, and even thirds. (CHEY SCOTT)

If you don’t know what a bánh mì is, you’re not alone. Big Daddy’s Bánh Mì’s always sets up a red sign next to its truck explaining what this “fresh, savory Vietnamese sandwich” is all about. The traditional bánh mì reimagines a baguette — one of the only French influences the Vietnamese kept after the end of colonization — filling it with steamy pork or steak, crisp vegetables, and fresh herbs.

Owner Mathew Truong couldn’t be happier to introduce you. Truong has loved making food ever since spending weekends cooking with his father, a longtime chef at Fai’s Noodle House (formerly at Northern Quest Casino). His father’s family emigrated from China to Vietnam during the 1960s before coming to the U.S. with affection for different Asian cuisines.

Alongside sandwiches, Truong also serves rice bowls and his famous Thai yellow curry ($13), a soulful heap of golden, slow-simmered chicken and spices. His knack for fusion will sometimes create seasonal specials, like the crowd-pleasing surf-and-turf bowl. But mostly, Truong stays pretty faithful to an authentic sandwich with tofu ($11) or marinated steak, pork or chicken ($12). Big Daddy’s even provides a bánh mì for kids ($7), which is a smaller portion with no veggies to win over a wary child… or, maybe, a skeptical adult. (ELIZA BILLINGHAM) ♦