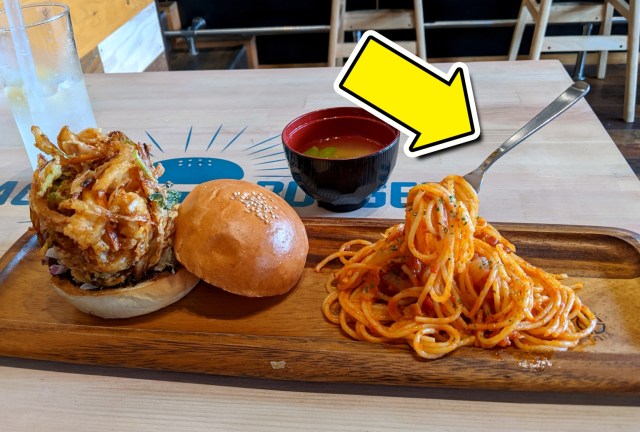 A dream come true for anyone who’s ever wanted to eat those plastic food samples.

Our Japanese-language reporter Mr Sato has been reporting on unusual food and restaurants in Japan for over ten years, so these days very little surprises him.

That doesn’t mean he’s given up on his lifelong mission to try all the tasty finds available, though. In fact, it’s only strengthened his resolve to seek out things that do surprise him, and he discovered one of those things last week, at a place called “Sea God Burger“.

As the name suggests, this cafe specialises in seafood burgers, but the seafood they use elevates them to god-level status, as they only use fresh fish and shellfish from the “Matsuyuki” sushi restaurant next door.

This sounded like it had all the elements to surprise Mr Sato’s taste buds, so he hopped on a train at Shinjuku, alighting at Musashi-Urawa Station 28 minutes later, and walked 18 minutes to the cafe.

▼ Just by looking at the burger options on the menu, Mr Sato knew it had been worth the trip.

▼ This set is said to contain the 笑えるナポリタン” (“Waraeru Napolitan”) , which translates to “Make you Laugh Napolitan“.

In Japan, “Napolitan” is the name given to a tomato-based spaghetti dish that contains onion, mushrooms, sausage, bacon and green peppers, with Tabasco sauce included as an option on the side.

Mr Sato was curious to find out what could be so funny about Sea God’s version of this popular dish, so he ordered the set, which comes with a Seafood Kakiage Burger, for 1,380 yen.

The Napolitan isn’t the only thing unusual about the set, as it comes with a special free miso soup, made with the bony leftovers of filleted fish for extra flavour.

Mr Sato has never had miso as a starter at a hamburger joint before, but this was no ordinary hamburger joint. The flavourful soup was a great introduction to the high quality of the seafood on the menu, and if you’ve ever had miso made with fish bone stock before, you’ll know how incredibly delicious it is — it takes the humble soup to a whole other level of umami-filled deliciousness.

▼ A great way to make use of fish parts that would otherwise go to waste at the sushi restaurant next door.

After marvelling at the quality of the miso, Mr Sato’s set was delivered, and the first thing that caught his eye wasn’t the burger but the Napolitan pasta next to it.

▼ Mr Sato immediately grinned and laughed out loud at the sight of it.

Determined to place his focus on the burger before the dramatic pasta display, Mr Sato decided to give his full attention to the seafood item first.

This burger was a work of art, containing a kakiage (crispy Japanese fritter) so giant it couldn’t easily be contained inside the bun. Mr Sato, however, was able to draw on his years of burger-eating experience to gently slide it, like a sleeping baby, into the wrapper provided.

This baby wasn’t going to sleep for long, though, as Mr Sato licked his lips and leaned in for a big bite. Chomping down through the layers, the plump chewiness of the bun paired perfectly with the satisfying crunch of the kakiage. The fritter was filled with vegetables, prawn and squid, all bound up in a fantastic batter that made each bite absolutely moreish.

If the Kakiage burger was the star of the show, the Napolitan was designed to play a supporting character. However, this was a character vying for its own share of the spotlight, with an appearance so eccentric you couldn’t take your eyes away from it.

▼ Yes, the fork is floating, making the whole thing look like a plastic food sample!

Food samples always look tantalisingly delicious, so Mr Sato was thrilled at the prospect of being able to finally live out his secret fantasies of devouring one of them.

Not only did the dish look amazing, it tasted amazing too. The acidity of the tomato sauce, combined with the addition of cheese, gave it a richness so addictive it only took seconds for Mr Sato to devour it all.

As you can see, Mr Sato decided to slurp up his spaghetti with chopsticks instead of the mysterious floating fork, as he wanted to keep the secret behind the fork’s powers of levitation for those who visit.

The entire meal was as delicious as it was eye-catching, and when Mr Sato asked the store manager why they decided to offer the “Make you Laugh Napolitan”, he said it was designed to be the signature dish of the cafe. As for the unusual idea to team up with the sushi restaurant next door, the manager said their cafe was previously a bar, but due to shortened business hours imposed on them due to coronavirus countermeasures enforced by the government, they decided to operate during the daytime instead by becoming a burger shop with support from the restaurant next door.

The way that small business owners have managed to pivot on their original business model to create something new is one of the few good things to come out of the pandemic. Without it, Mr Sato may never have been able to enjoy a burger made with sushi-quality seafood or a pasta that made him laugh out loud.

And we may not have been able to enjoy vending machines manually operated by a Japanese grandmother either.

This website uses cookies to improve your experience while you navigate through the website. Out of these cookies, the cookies that are categorized as necessary are stored on your browser as they are essential for the working of basic functionalities of the website. We also use third-party cookies that help us analyze and understand how you use this website. These cookies will be stored in your browser only with your consent. You also have the option to opt-out of these cookies. But opting out of some of these cookies may have an effect on your browsing experience.
Necessary Always Enabled
Necessary cookies are absolutely essential for the website to function properly. This category only includes cookies that ensures basic functionalities and security features of the website. These cookies do not store any personal information.
Non-necessary
Any cookies that may not be particularly necessary for the website to function and is used specifically to collect user personal data via analytics, ads, other embedded contents are termed as non-necessary cookies. It is mandatory to procure user consent prior to running these cookies on your website.
SAVE & ACCEPT